Forgiving people is not always easy. But when we forgive, we show the fruit of God’s love!
Gospel Light Curriculum
11 min read

Use this lesson to teach elementary students about forgiveness through the story of Joseph.

Agape, the love of which Paul speaks in Galatians 5:22, is love centered in action rather than in emotion. This love sees something infinitely precious in the beloved and does something to show that love.

In spite of our unworthiness, God saw something so precious that He GAVE His only Son to take the punishment for our sins.

As God’s children, we are called to love others, even though they may be imperfect or hard to love.

While we may not always be able to generate feelings of love toward those who seem to be unlovable, we can always demonstrate our awareness of their eternal worth and value. We can take action to show God’s love.

What action can we take to show God’s love? Paul calls us to “forgive whatever grievances you may have” (Colossians 3:13).

In a culture that encourages us to take our grievances to court and extract the fullest measure of what the law says is due us, is it realistic or even reasonable to advocate forgiveness?

What if the wrongs we have endured are truly grievous? What if the other party has truly caused us hurt?

Those are the times when we have the richest opportunity of all, the chance to “forgive as the Lord forgave you” (Colossians 3:13).

Have we ever endured even a fraction of the abuse our Lord received? Yet He loved; therefore, He forgave. We are called to take the same action.

God’s great love in sending Jesus to die for our sins is shown to others when we forgive them. Let’s play a game to remind us of the importance of forgiveness.

Group students into teams of five. Give each team a towel and a ball.

Four students on each team hold the towel between them at waist height. The other team member stands across the playing area and throws the ball so that the towel holders can catch it with the towel.

Team members continue rotating between throwing and holding, keeping track of the number of times the team catches the ball on the towel. Teams score one letter of the word “forgiveness” each time the ball is caught.

Students from that team answer one of the Discussion Questions below.

Tell the Story of Joseph

Why might brothers and sisters be angry with each other? Allow responses.

Today we’ll meet some brothers who were VERY angry at one brother! Follow along with me as we use our play dough to tell today’s story.

Make a coat out of the play dough. Have your students do the same.

Four hundred years before God’s people were slaves in Egypt, there lived a man named Jacob who had 12 sons. One son, Joseph, was Jacob’s FAVORITE son. This made the other brothers jealous!

Joseph also had some dreams when he was young. These dreams seemed to say that his family would one day bow down to him.

Well, when he told his family his dreams, his brothers became even more jealous!

And if that weren’t enough, Jacob made a special coat for Joseph. The special coat showed everyone that Joseph was Jacob’s favorite son. Were his brothers ever jealous!

Make a pit—a big hole in the ground with the play dough.

One day, Jacob sent Joseph to check on his brothers who were taking care of the family’s animals far away from home.

When the brothers saw Joseph coming, they decided to take his coat from him and throw him into a nearby pit.

Soon the brothers sold Joseph to some traders (people who buy and sell things) who were on their way to Egypt.

Joseph’s brothers told their father that Joseph was dead. But really, Joseph was now a SLAVE in Egypt.

Despite being a slave, Joseph trusted God and did his best. Soon he became his Egyptian owner’s most trusted servant.

Roll ropes out of play dough and use straws to make jail bars.

The wife of the man who owned Joseph lied about Joseph. She got Joseph put into JAIL! But once again, Joseph trusted God.

He did his best and helped other prisoners. Soon he was put in charge of the jail! He even helped two prisoners by telling them the meaning of dreams they had.

Some time later, Pharaoh, the ruler of all Egypt, had a STRANGE dream. No one could tell him what it meant!

But one of the men Joseph had helped in jail told Pharaoh about Joseph. So Pharaoh called for Joseph.

Soon Joseph was standing in front of Pharaoh! He told Pharaoh that his dream meant there was going to be a famine—years when there wouldn’t be any rain and very little food.

Use two ropes of playdough to make a ring and a necklace.

Pharaoh thought about what Joseph had told him. He realized that Joseph was a VERY wise man. So he made Joseph second ruler of the whole country of Egypt!

He gave Joseph his ring, so Joseph could make laws. He gave Joseph a royal necklace to wear around his neck, so people would know Joseph was a ruler.

Joseph had big barns built to store food to eat during the famine. He was in charge of everybody except Pharaoh!

After seven years, the famine DID come, as Joseph had said it would. There was also a famine back where Jacob and all of Joseph’s brothers lived.

Soon the brothers came to Egypt in search of food. But they didn’t recognize Joseph. They bowed low before Joseph, as he had seen in his dream. They BEGGED Joseph to sell them food!

Joseph didn’t tell them who he was just yet. But he gave them lots of grain and sent them home. He also kept one brother with him, just to be sure they would come back!

Make a smile from two ropes of play dough.

Joseph’s brothers DID come back. Finally, Joseph told them who he was!

His brothers were afraid. Would Joseph punish us? they wondered. Joseph did not. Instead, he FORGAVE them!

Joseph invited them all to come and live in Egypt, where there was plenty of food for all their families! Joseph showed God’s love to his family, no matter what!

Forgiving people is not always easy. Even in our families, people can hurt our feelings. But when we forgive, we show the fruit of God’s love!

When we have been forgiven by God, we can show His love to other people by forgiving them. Let’s find out how a woman helped some people forgive each other and show God’s love.

What are these things used for? Students respond.

Before washing machines had been invented, it took people many hours to wash and iron their clothes. People often hired others to do their laundry.

Amanda Smith was a former slave who earned money by doing laundry for others. After her husband died, she had to work hard to earn enough money to care for her family.

Amanda also worked hard so that she could spend time telling others about God’s love and forgiveness.

One day after hearing Amanda speak, a young man asked for help. The man had fought with a friend several years before.

Amanda’s teaching helped the young man see that he needed to forgive his friend, but he was afraid to speak to him. Amanda prayed for him and said that God would help him.

The other man said, “I’m so glad you came to talk to me. I wanted to say something, but I was afraid you wouldn’t speak to me!” The two men quickly forgave each other and became good friends again.

Amanda felt that seeing those two men forgive each other was worth all the clothes she had to wash in order to have time to tell others about God and His love.

Let’s thank God for forgiving us and ask God to help us have courage to obey this verse and forgive others. Lead students in prayer.

Make a sample mobile before class.

We show God’s love and forgiveness to others when we forgive them. Other people also show us God’s love when they forgive us! Let’s make mobiles to help us remember that message!

Give each student a paper plate. Each student draws a large spiral on his or her plate, starting from the center of the paper plate and leaving at least 1 inch (2.5 cm) between each loop of the spiral.

Students draw pictures of or write sentences about forgiveness along the path of the spiral.

Suggest the following sentence starters for students to complete: “A time when someone forgave me was . . . ” or “I can show forgiveness by . . . ” or “People forgive others when . . .”

Students may also write the words of Colossians 3:13.

Ask the Discussion Questions below as students work on their mobiles.

Students poke one end of the paper clips through the rounded end of the spirals and tie lengths of curling ribbon to the other end of the hooks to create mobiles.

Bear with each other and forgive whatever grievances you may have against one another. Forgive as the Lord forgave you.

Display paper on which you have printed Colossians 3:13.

God’s love was shown when He sent Jesus to die on the cross and take the punishment for our sins so that we can be forgiven. We can show God’s love to others, too, when we forgive them!

Have a volunteer read the verse aloud.

What does it mean to bear with one another? (Have patience with each other and not get mad because of the way people act or bother you.)

“Grievances” is another word for complaints we have about someone or some situation. What should we do with our grievances? (Talk about ways to solve them and forgive the person.)

What reason does the last part of this verse give us to “bear with each other and forgive” each other? (God forgives us.)

Students sit in a circle. Gently toss the ball to a student, saying the first word of the verse as you throw it.

Student who catches the ball says second word of verse as he or she tosses the ball to another student in the circle, who then says the third word of the verse.

Continue until the entire verse has been said several times.

Provide Bibles or mark these verses in your Bible for several students to read aloud as reminders of God’s forgiveness of us: Psalm 86:5, Daniel 9:9, John 3:16, Ephesians 4:32.

Lead students in prayer, thanking God for His forgiveness and asking Him to help us show His love by forgiving others.

Did you enjoy this lesson? It was adapted from Gospel Light, Elementary curriculum. Discover the Gospel Light difference in this video!

How to Make Every Sunday School Lesson Point to Jesus

Israelites in the Desert

The Fruit of the Spirit 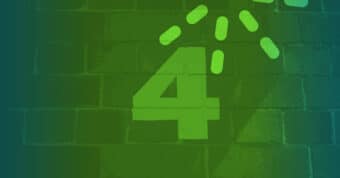 4 Ways to Pray for Kids in Your Ministry 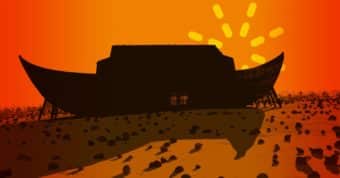 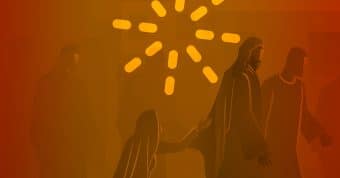 Miracles of Jesus: Jesus Heals a Woman and a Girl (Elementary Lesson)