How to Teach Kids the Creation Story (Elementary Lesson)

Captivate kids by introducing the Big God Story and inviting them to respond in worship.
Courtney Weaver
9 min read

Use this lesson outline to teach elementary students about the Creation story found in Genesis 1—3. It’s the very beginning of the Big God Story!

Opening Activity: What’s in a Name?

Invite the children to sit in a circle. Ask children to think of either a type of animal or an animal noise that matches the first letter of their name—for example, Darien Duck or Mooing Melissa. Ask one child to start by sharing her fun new name. Then move on to the next child in the circle, who will attempt to share the first child’s name as well as his own unique name. Continue around the circle this way, with the last child attempting to remember the name of every child before him.

Because young children can feel uncomfortable when trying to remember facts in a group, encourage the kids to help each other by providing the noise their animal makes as a fun hint!

Tape the pieces of butcher paper to the wall. Fill the cup with water and set it out along with the paint and paintbrushes. Optional: Instead of the paint supplies, set out the markers or chalk.

Today we’re starting at the very beginning of God’s big story. Let’s ask the Holy Spirit to speak to us today. Lead children in Prayer of Release.

(The Prayer of Release allows children and leaders to pause, be still, and ask God to quiet their hearts and minds. Before you pray, you might ask the kids to hold out their hands, palms up, in a spirit of releasing their worries and distractions in order to better receive what the Holy Spirit might have for them today. Then encourage the kids to quiet their voices, take a seat, and pray with you.)

Keep your eyes closed for a moment and tell me what you see. Interact with responses. When I close my eyes, I can’t see anything—only darkness! Invite children to open their eyes.

The Big God Story tells us it was like this in the very beginning. Before God created the animals or the trees or the sun, everything was empty. There was nothing—nothing except for God. He is eternal. What does eternal mean? Invite responses.

It means that God has always been and will always be. Ever since creation, God has been working to tell His big story to the world and to invite every person to know and love Him.

Go to first piece of butcher paper and pick up a painting or drawing tool. In the beginning, God created the heavens and the earth.

Have children turn to Genesis 1 and follow along as you read verse 1. The Bible tells us God’s Spirit hovered over the waters. He was in control of everything that would happen—of everything that He would create.

On the first piece of butcher paper, draw blue wavy lines in the middle to represent the waters. Our powerful God was about to begin His big story that continues today!

God spoke, and with His words He began to create the world. God said, “Let there be light,” and there was light. Have children find the word “light” in verse 3. Still on the first butcher paper, fill in the top left portion with bright yellow.

God separated the light from the darkness, and He saw that it was good (verse 4). Fill in the top right portion with dark blue or black. God continued by creating the land and the seas. Draw a brown patch of land and a big body of water.

Move to third piece of butcher paper. Then God created people in His image. And instead of speaking mankind into being, God used dirt from the ground to form a man. Draw simple figure of a man.

Then God breathed into the man, and he lived! Then God created a woman to be the man’s partner. He took a rib from the man and made a woman to be his wife. Draw simple figure of a woman.

Does anyone know the names of these first two people? Allow responses. That’s right—Adam and Eve.

God put Adam and Eve in the garden of Eden, a beautiful place where they could live and take care of the things God had created. In the garden, they enjoyed a perfect relationship with God and each other. God told Adam and Eve they could eat anything in the garden except the fruit from the Tree of Knowledge of Good and Evil. Go back to second piece of butcher paper and point to tree.

God told them that if they ate from this tree, they would die. God is eternal, which means He knows the beginning and the end. He didn’t want harm to come to Adam and Eve.

One day a snake spoke to Eve. Still on second piece of paper, draw a snake near the tree. Can you hear him coming? Invite children to make hissing sounds with you.

When Adam and Eve ate the fruit, they disobeyed God, and sin entered the world. Their choice broke their relationship with God. Draw a jagged line down middle of paper.

Adam and Eve’s choices broke the relationship between God and people. But because God is eternal, He made a plan to send His Son Jesus to die for our sins so we could be in relationship with Him forever. On third piece of paper, draw a cross.

Jesus took the punishment for our sin. God loves us so much that He invites each of us to know Jesus and accept His forgiveness for our sins. Still on third piece, draw a heart.

God is eternal. He has always existed and will always exist! He created all that we can see, taste, touch, hear, and smell. He created you and me. He invites you, me, and everyone to be a part of The Big God Story. Share a personal story about how you’ve seen the eternal God in creation.

Before the mountains were born or you brought forth the whole world, from everlasting to everlasting you are God. Psalm 90:2

Write each word of the verse and the verse reference on a separate sheet of paper. (If you have a large group of kids, write the verse again on another 20 sheets of paper.) Scramble the papers.

Talk with your children about the Remember Verse and how it relates to today’s lesson point—God Is Eternal. Then give the kids the sheets of paper and invite them to put the words in the correct order on the floor. Once they have the words in order, they can read the Remember Verse out loud. Then have the children scramble the words again and repeat the process. Keep playing until the kids have memorized the verse.

Children process what the Holy Spirit has been teaching them and respond to God through individual and collaborative worship and various forms of play, including interactive games, activities, experiments, and more.

Print the Creation images and cut them apart. Make sure you have one image for each child.

God is eternal. He created the world and everything in it. No one else helped God create the world. He has always existed, and He is the one true God who rules over everything. Whenever we see a mountain or a beautiful flower or a buzzing bee, we can know that God created its beauty. What is your favorite part of God’s creation? Allow responses.

It’s amazing that even after people chose to disobey God, He provided Jesus so we could have a perfect relationship with Him again. When we accept Jesus’ gift of salvation, God cleans us from all our sin and invites us to be a part of The Big God Story!

Encourage your kids to respond to the ways God has shown His grace and love in their lives. Invite each child to take one of the Creation images and color it with colored pencils or crayons. Then, in the space around the image, they can either write or draw a word that represents one thing they’re grateful for about God. It could be something they love about His creation, or a special person He has placed in their lives, or one of His characteristics—His mercifulness or eternal nature or love.

Then invite the children to come up one at a time and tape or glue their images of creation to the black poster board. As each child places her image on the poster, invite her to share what she wrote or drew. Together the kids’ images will create a beautiful collage of God’s creation and His wonderful characteristics. Also encourage kids to share with their families what they chose to express about God.

Game: Let There Be Light

Lead the children in a fun game to help get them moving and thinking about our great God who creates something out of nothing. Tell the kids you’re going to play a game similar to Simon Says, and they’ll need to pay close attention!

Our God simply spoke and things started happening. All of creation listened to what God had to say. We can continue listening for God’s voice because we know we’re a part of The Big God Story, which began with creation and continues today! 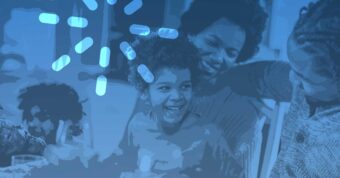 The Wonder of Gratitude at Thanksgiving 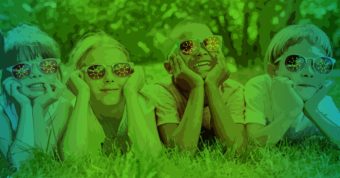 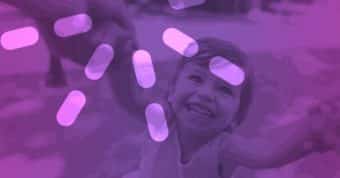 How to Involve Kids in Grace Bomb Day